5/8/13 – I had a discussion the other day with a filmmaker friend of mine, who seemed surprised when I mentioned that when it comes to writing a script, that I usually never have a clear story in my head and that I usually only have a single frame or shot in my mind which I work from. I guess the norm is to have a beginning, mid-section and ending worked out before attempting to write. To be honest, I don’t even remember what was taught to me during university. All I know is that, once I’m inspired and I start writing/typing, it usually continues until about halfway of the narrative, which is where I get stuck for a period of time. Until that point, I’ve chosen where to set the story, introduced the characters, established their flaws and quirks and given clues to what the story is about. Then I usually take some time off, which is the organic development part. The brain will still be thinking, looking for ideas, answers, ways to connect whilst I’ll be seemingly minding my own business, watching a film or working at my boring and stressful job. Could be a week or two, even a month to three months later but eventually, I will formulate the best way to develop and end the script. This part is the most fun to write – it’s fast, frantic, exciting, shocking and exhilarating. My eyes will sting, my back will ache but I end up with a first draft, complete from beginning to end. 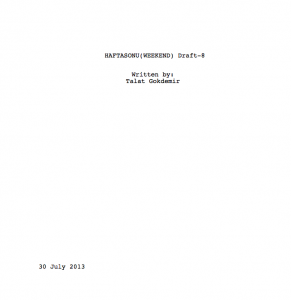 This process reminds me of another. Not knowing how it’s going to end? Waiting and experiencing while realisation sinks in? The rush and excitement? Sound familiar? Doesn’t everything we do in life roughly fit into this system?

A normal day consists of getting up to the unknown. We may know that we will have breakfast (if we don’t snooze away the morning that is), we will get out the house to go to work (or search for work from our beds), socialise with our colleagues etc. We never do know however if there will be a surprise, a good or bad news, a pay rise, a car crash, a 2 for 1 offer of chicken thighs, a wink from the man walking by you which makes you question your sexuality, a wink from a woman walking by you which makes you question your fidelity! Anything can happen! And that is what makes what they called life so fun and worth living for.

We may figure out how to make money, where to live, how to get along with a housemate. But we also can learn how to use chopsticks and understand the difference between the words, vertical and horizontal. We thrive to find a partner who we can bond with and share moments with. But we can also create random words to make us chuckle, use made up languages near others that can come across as weird, start singing loudly, in-sync, suddenly. People normally go on holidays to chill or see culture. Well, we also do that to experience new cities, people, discover, get lost, find our way back, run, jump and to smile. 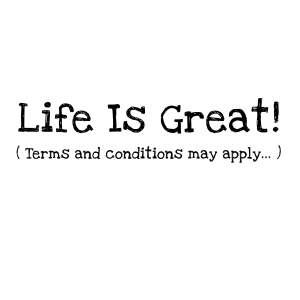 All this might sound extremely cheesy but this is why life is worth living for! This is why rather than dumbing ourselves down in momentary numbness, we should protect ourselves, heal ourselves and go experience what is in us and what is out there. Life can be tough a lot of the time, which is why people are bogged down in toxins and alcohol and hallucinogens. But isn’t it better to actually take a deep breath or two or ten, focus and actually preserve the health that is needed to be actively present in this lifetime? This brings us to the title of this blog entry. We, as a civilisation, are being distilled!

I’ve never been a huge drinker, excluding a year of university which even then wasn’t that crazy, but lately I’ve been drinking just for the sake of it. Just because. I could’ve chosen anything else on the menu but instead I just ordered beer. Alcohol is socially acceptable, that’s why. But why is it socially acceptable? Because the man says so! The man says go earn money, and if you can’t earn money, go drink beer. The man says go make babies, and if you’re unhappy with babies, go drink wine. At a party? Drink vodka. At a social gathering? Lighten the mood with a shot. It’s socially acceptable so the Man can create yet another industry to distill our money, our mood and our brains. 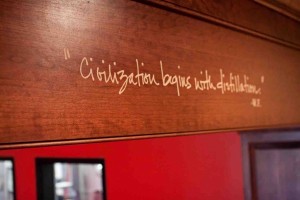 As the civilisation has ‘advanced’ and we as people have increased in number, what is out there to calm us down from all the problems in the world? What is available for consumption to numb us and make us think about beautiful unicorns dancing on flowery fields? Besides the alcohol, we also have cigarettes and shitloads of drugs, all carefully designed by the pharmaceutical companies whom continue the distillation and keep on making pretty money. Once we are addicted, then there are more ways to counter this addictions with further gums, patches, fake cigarettes, anti drugs, aa meetings, again all fabrication of the man. No one is considering how we are affecting our bodies and future generations with pre-disposed conditions of addictive personalities, cancer, diseases, depression… Where is the fun in that? Where is the fun in any of this? It was fun like, 10 years ago during university, while we were still trying to discover who we are and actively seeking acceptance from our friends and peers, when we weren’t as aware as we should be today.

Just like in scriptwriting, the midsection is the tricky part in life. Approaching the age of 30, I’m hopefully still not halfway there yet but I feel mature enough to consider more parts of life than before. The midsection is where people get stuck, lost, consumed, distilled. As long as we don’t lose sight of the goal, there isn’t really much that can stop us. And it’s true, it’s hard to escape every single negative aspect of this life. But we can damn try by being actively present in the now and planning for the future at the same time.

Remember how I talked earlier about how when I start to write, that I don’t have a clear endgame in mind? Well this blog entry had a similar birth. What you have read is what’s going through my mind right now. Cos I’m still redrafting my script and continuing to search for actors. Cos I’m still relishing the notion of getting back to London and enjoying myself. And cos as of August 3rd, I’m sober and will stay like that for a good while. Like I mentioned before, I was never a heavy drinker and since I’m not, there isn’t really a point in consuming something that I don’t really enjoy anymore. In my mind, I have a perfect point in time for having a drink or two but until that date, I refuse to be subject to distillation! Until then, I will continue writing, continue enjoying life as much as I can! 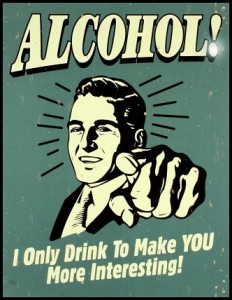 the Man at his best

Another fun read is this article from the Guardian titled “Why do writers drink?” http://www.theguardian.com/books/2013/jul/20/why-do-writers-drink-alcohol

13/6/13 – Before I start mumbling, lets first see what Wikipedia has to say about the word ‘Cohesiveness’. “… A group is said to be…