4/7/12 – I’m currently flying back to London Luton Airport as I write this, can’t wait to land and get a good rest before I go back to work tomorrow(today). I work in a small office as a PA/Office assistant which isn’t the ideal, dream job but I’ve come to accept that for now at least. It’s what I need to do in order to keep the financial situation stable, what I have to do to save up for the next film(currently hoping for a 2013 Q1 or Q2 shoot in Cyprus!) and enables me to travel from time to time, which brings us to the topic of this blog entry, Kosovo and me being there for the screening of ‘Leave’ at the Shqip International Short Film Festival. My first impression of the country as we crossed the border from Macedonia(I landed in Skopje and was picked up by Arber, just one of the many extremely friendly people I would meet during my one week stay), was that it looked exactly like Cyprus. The houses, the trees, the colours.. The way billboards were randomly scattered everywhere with the abundance of Arial typography, the construction of buildings with no consideration for environmental and logical layouts.. So similar.

Hotel Victory was top notch, the statue of liberty on the top was also top notch. Besides the large breakfast offering, the festival also made sure the filmmakers spent plenty of time together with an organised lunch every day alongside other activities like barbecues and afterparties. The dangerously cheap Peja beers(€1.50 a bottle, far away from the £3 I’m used to pay) added to the friendly, relaxed atmosphere of the whole festival and we managed to have a great time. The capital Pristina doesn’t offer much in touristic value and as a fairly young country, it’s very apparent that they haven’t really learned to promote or capitalise themselves just yet. A simple fridge magnet was extremely hard to come by.. And did I mention the heat? The last day it reached 35 degrees and I was melting, can’t believe I actually was filming in 46 degrees back in the summer of 2010.. 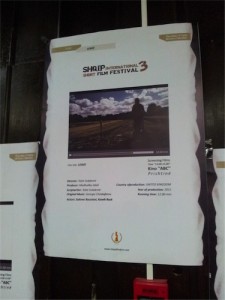 I’d say 90% of the films that screened during the festival were worth seeing, overall it was an impressive selection and it was even greater to meet the filmmakers who created them. The polish films looked and felt the most professional to me, I dunno what they’re being fed there but damn, some of them looked pretty beautiful. The closing ceremony was on the 30th where the awards were given out, which was broadcasted live on the main tv channel there. And then it was all over(I’m skipping over the dance floor antics), the festival had ended, everyone would be leaving the next day, suddenly I felt nostalgic for a period of my life which had just ended a speck of a second ago. I’m a bit weird that way..

Due to the relatively cheap flight tickets and their slightly annoying dates, I would be staying an extra three days in Kosovo. Astrid and Coskucan, my mates from London, had joined me a few days earlier and with my local buddy Fuad, another super duper friendly Kosovian, we made our way towards Prizren, a city towards the south of the country. It managed to offer what Pristina lacked, green hills, historical fortresses, Ottoman bath houses etc. It was also interesting to find out that most of the people could speak Turkish in this region. 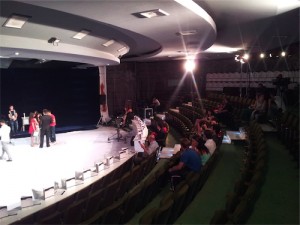 Overall, it was a real privilege to be a part of the whole experience in Kosovo and it would be nice to come back next year for the fourth edition of the festival. Currently looking ahead to next summer, my compulsary one month military service may just sever that idea but one can only hope for the best, right?

A film before its time: Ang Lee's Hulk